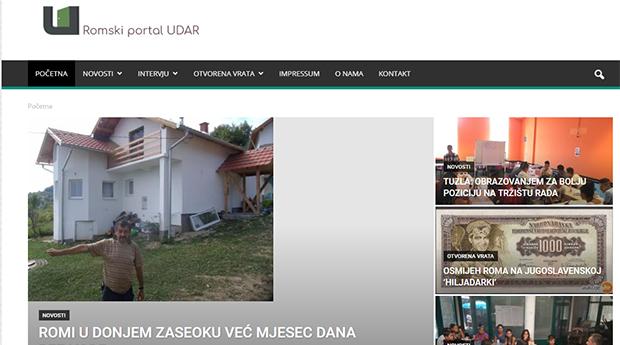 A Sarajevo-based Roma web portal dubbed UDAR has been active in Bosnia and Herzegovina since June 2017 at http://www.portal-udar.net .

The word “UDAR” means “door,” which has a symbolic meaning because one of the portal’s goals is to open the Roma community to the general public.

“The idea to launch the UDAR portal resulted from the need to offer information to the public, both general as well as Roma public, on all that is happening within the B&H Roma community. Additionally, UDAR is a response to the program policy of public broadcasters in B&H, which have not as yet recognized the importance of launching a newsroom that would produce program for Roma and in the Roma language,” the editor-in-chief, Dalibor Tanic, told the SEENPM website.

After several months of education, implemented in four cycles, a team was created out of reporters who successfully completed the program of basic journalism training.

These young journalists/reporters agreed at the end of the training that their common mission would be to show a different and more objective image of Roma, but also to criticize all those who are responsible for the current position of Roma in B&H.

“I feel the need to work on crushing stereotypes that exist about Roma in our society. This is also an opportunity to show what kind of problems are present in the Roma community in B&H. Further, we will try to promote the culture and tradition of Roma. Everyone will say that Roma sing and dance beautifully, but our tradition and culture are far more than that,” said Aldijana Musli, a participant in education and a journalist of the portal.

The editor-in-chief explained that the newsroom is made up of young, educated Roma men and women from B&H who produce various content on a daily basis, making this a unique portal. He said that only some of the content is translated into the Roma language for the time being, but in the future its scope will increase.

“All of the portal’s reporters underwent intense and demanding training, which is practically not finished because they are all still in the education process. Everything that can be found on our portal comes directly from the Roma community or is related to Roma. From time to time we also publish information that is not necessarily Roma related,” said Tanic.

Funding for the portal’s launch was provided by the Open Society Fund B&H and Sarajevo-based Media Initiatives is the organization charged with implementing the program.

The article is a contribution of Media Initatives, founded by Media Plan, a SEENPM member organization.