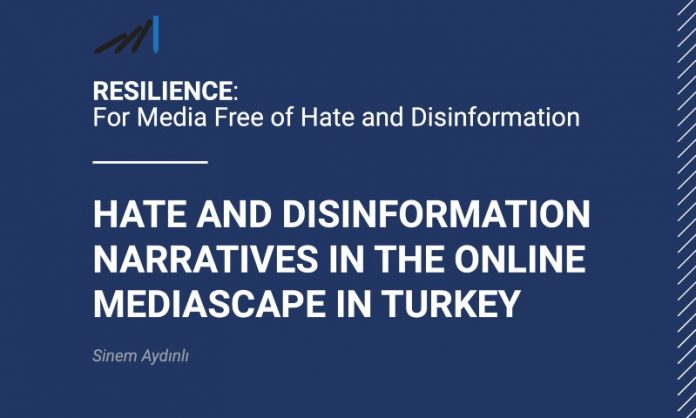 Focusing on the hate speech and disinformation in online media in Turkey, this report is a follow-up to an earlier report within the Resilience project that tackled models of hate, disinformation and propaganda and their political and economic foundations.

This report shows, through four different case studies as the samples for each target group, the dynamics of motivation and dissemination of hate and disinformation narratives in online media.

It provides a general understanding of how different forms of expression emerge, interact, and potentially construct an online mediascape of hate content.

Although new regulations on social media have come into force in Turkey, they do not include any legislation regarding hate speech used in online media and communication platforms.

This report thereby argues that a self-regulatory mechanism is needed in order to combat hateful messages and disinformation disseminated online.

This publication was produced within  Resilience: Civil Society for Media Free of Hate and Disinformation, a regional project financially supported by the European Union and implemented in the Western Balkans and Turkey by a consortium of media development organizations led by SEENPM. It is part of a series of publications on the same general topic focused on hate narratives researched in Albania, Bosnia and Herzegovina, Kosovo, Montenegro, North Macedonia, Serbia and Turkey (all publications are available on the SEENPM website).

Earlier research within the same project tackled models of hate, disinformation and propaganda and their political and economic foundations. The resulting publications are  available on the SEENPM website.

Read the previous report on Turkey: Hate and Propaganda Media in Turkey – Affiliations, Models and Patterns

Follow RESILIENCE: For Media Free of Hate and Disinformation

www.seenpm.org
Facebook SEENPM
Twitter SEENPM
You can reach us at admin@seenpm.org for more information about the project.

Funded by the European Union