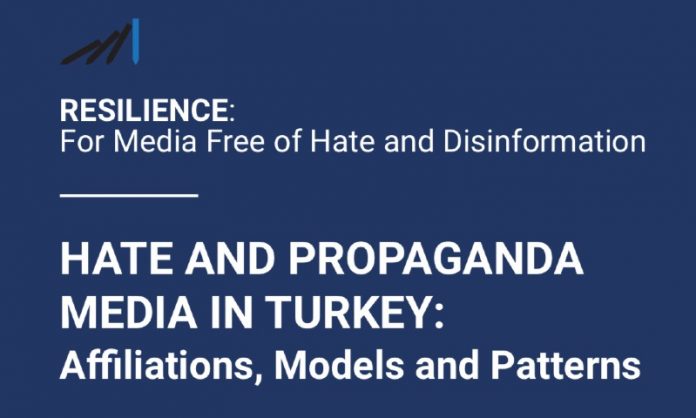 This report shows the political and economic affiliations of hate, disinformation, and propaganda media and their patterns in Turkey during the AKP’s rule. It demonstrates through specific examples where hate speech and disinformation media get power from, and what rationale they follow while producing hate speech and disseminating disinformation. This report thereby argues that new regulations for media ownership are needed in order to break the domination of hate media in a hopefully pluralistic media environment.

It also reasserts that the individuals and/or groups other than those supporting official ideology become “divisive of national unity” so that they easily become hate objects targeted by both partisan and non-partisan but patriotic media. Currently, disinformation disseminated by pro-government media with political and business interests in the government is spread in the name of “love for President Erdoğan” and “propagandizing for his government.” Furthermore, those media that position themselves as nationalist, patriotic and critical of the AKP share a common language with the partisan media when they see threats to the founding ideology of Turkey. It can thus be concluded that this report reaffirms the commitment not only of the pro-government media to spreading propaganda and disinformation but also of the patriotic media’s hate-filled news reporting when the “national interests” are at stake.

This is seen through news reporting in terms of hate media, which obviously do not practice a rights-based journalistic approach, with their contents promoting violence against or harassment of individuals and disadvantaged groups. These media repeat and cause egregious violations of these groups’ rights and go along with a polarizing rhetoric that fosters fanaticism and again encourages violence in targeting their hate objects.

This report principally suggests the urgency of the need for a self-regulatory mechanism developed by civil society and independently from the government to monitor hate speech, disinformation and propaganda. This mechanism would also need to be applicable to social media in Turkey where the government’s control of the media and communication conflicts with fundamental principles of freedom of speech. This is because its decisions in relation to sanctions are arbitrary and do not guarantee the rights of the most vulnerable members of society nor protect them from being targeted by hate speech.

Furthermore, ownership pluralism, one of the pivotal conditions of a democratic media environment, should be ensured through new regulations that break down the conflicts of interest between media groups and power, the report argues adding that this would eventually pave the way for a freer media atmosphere involving independent actors and critical voices who do not please the government.

All in all, the highly concentrated media market and the inexplicit and non-transparent financial structures of media ownership are the biggest obstacles to media pluralism in Turkey, the report concludes. The media owners’ political and economic affiliations undermine the task of countering the hate speech and disinformation in the media. This situation stands as a major barrier to social cohesion and democracy in Turkey, the report argues.

This publication was produced within  Resilience: Civil Society for Media Free of Hate and Disinformation, a regional project financially supported by the European Union and implemented in the Western Balkans and Turkey by a consortium of media development organizations led by SEENPM. It is part of a series of publications on the same general topic researched in Albania, Bosnia and Herzegovina, Kosovo, Montenegro, North Macedonia, Serbia and Turkey (all publications are available on the SEENPM website).

Follow RESILIENCE: For Media Free of Hate and Disinformation

You can reach us at admin@seenpm.org for more information about the project.

Funded by the European Union